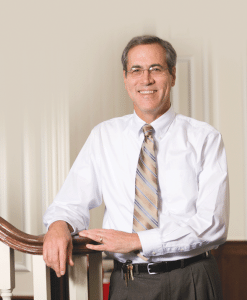 The March 11 issue of BusinessWest included an article on senior living and featured Glenmeadow.

A few weeks ago, Tim Cotz, president and CEO for the past 20 years at Glenmeadow, noticed one of his housekeepers wished an elderly resident ‘happy birthday’ on Facebook.

Of course, he’s impressed with an octogenarian who is active on Facebook, but he said he’s even more pleased to see one of his staff reaching out to her, because it’s the personal bonds among the staff and residents that make Glenmeadow — an independent- and assisted-living complex in Longmeadow — feel like home.

In fact, Cotz can be found pouring coffee every weekday morning at 7 a.m., walking around opening shades for more light, and pouring glasses of chardonnay at a late Friday afternoon cocktail hour; his daily, hands-on style is a physical illustration of what he expects of his 110 employees in all their different roles. This philosophy, and an open ear to requests for change, have helped Glenmeadow grow successfully over the past 20 years, weather the Great Recession, and recently complete a $4 million renovation (more on that later).

Cotz describes Glenmeadow as “unique” in the business of senior living because it’s a stand-alone, nonprofit facility, while most of its competition is religious-based, for-profit, owned by private entities, or merged into large conglomerates.

He told BusinessWest that, while he’s always worked to enhance services and meet the expectations of his residents and their families, it’s a much more vocal demographic these days.

“I don’t think we can ever be a place where we say, ‘this is what we do, this is what we offer, that’s what it is,’” said Cotz, who noted that the organization’s original managers, which became a board in 1985, was long run by a group of ladies; in its 130-year history, Cotz is the first male to have the leadership role in Glenmeadow. “We’re ever-evolving.”

As another example, he mentioned a new addition to the staff, whose role is to help residents with their technology needs. Requests for assistance with iPads, iPhones, laptops, and the general need to keep up with social media is as important to residents, he said, as it is to everyone else today.

When Glenmeadow opened its new facility 17 years ago, “we had one person here with their own computer,” Cotz explained. “Now we have wi-fi throughout the building, and a majority of the folks have computers, so we’re looking at how we continue to enhance those services.”

For this issue’s focus on the business of aging, BusinessWest toured Glenmeadow to learn more about an elder residence with a long history in Greater Springfield, and how that nonprofit is catering to a demographic requesting amenities and programs reflecting a younger mindset than ever before.

Working in long-term care since 1970, Cotz started as an orderly in college, and graduated from Hartwick College with a bachelor’s degree in healthcare before earning his master’s from George Washington University.

From 1982 to 1988, he served as executive director of the Geriatric Authority of Holyoke, then led Berkshire Health Systems in Pittsfield for five years, before transitioning to Glenmeadow, which at the time was located in downtown Springfield. 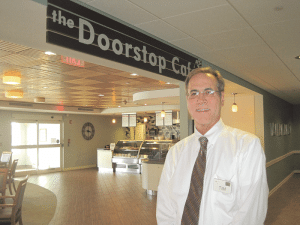 Tim Cotz said the $4 million in recent renovations includes the Doorstop Café, a popular meeting place for residents as well as visiting friends.

Explaining Glenmeadow’s history, Cotz said the nonprofit was founded in 1884 with donations and bequeaths, making it the oldest residential nonprofit for the elderly in Springfield. Originally named the Springfield Home for Aged Women, it was created to provide shelter and care for female seniors.

“Every city at the time had a ‘poor farm,’ and that’s where old people went,” Cotz told BusinessWest.  “But the citizenry of Springfield felt that they deserved a better option.”

The first structure was a home behind the current Red Rose Pizza in Springfield’s South End, which then moved to a mansion on the corner of Chestnut and Carew streets (the building is now used for alcohol and drug rehabilitation services), and by the 1960s the name was changed to Chestnut Knoll.

When the facility needed more space, it purchased a 20-acre plot of land from Daniel O’Connell’s Sons in 1993, just over the Springfield line in Longmeadow, and construction for the current facility was completed in 1997. The richly landscaped campus and buildings now boast 113 independent apartments (14 more were added in 2000 to the original 89 units), boasting full kitchens and baths, plus 34 assisted-living apartments with kitchenettes.

Demand for units has been fairly consistent over the past two decades, Cotz said. The recession impacted the nonprofit a bit in 2008 and 2009, causing the waiting list to shrink, but residents have consistently filled the apartments. After the recession, not only did the waiting list fill up again, the changing style of how seniors want to live created demands of a different sort.

Specifically, Cotz pointed out two societal shifts that have affected Glenmeadow over the past decade. First is the trend toward ‘aging in place,’ which the facility turned into a revenue generator in 2001 with the introduction of Glenmeadow at Home, a non-medical, private-duty, home-healthcare company for those living there.

“People are living so much longer and living healthier, and typically there are periods where they need some additional support. So now we can hire our own staff, train them, do the background, and supervise them,” he explained. Residents also have the option to hire outside workers for those extra services, if they so choose.

The goal is to provide non-medical services that help elders stay comfortably in their home, which includes companionship, handyman service, transportation, meals, dog walking, and more. By 2003, Glenmeadow at Home expanded to caring for anyone 62 and older in the Greater Springfield community. Calls to clients’ personal physicians for medical attention are part of the services, and that eventually evolved into care management in the home to coordinate all the services that an elder would need as their medical care requirements increase. Today, Glenmeadow at Home employs 80.

The second trend Cotz has observed is a renewed focus on fitness and lifestyle programming.

“The population we’re serving is clearly looking for more options for wellness, so much so that 83% of the people in this building exercise regularly,” he explained, which has led to an expansion of wellness services on site.

“When we opened 17 years ago, we had a room about this size, and if people brought an exercise bike, we’d store it in there,” Cotz said, pointing around his office, which comfortably holds a desk, a table, and two easy chairs. “Well, now we have three trainers on staff, Nautilus equipment, and numerous exercise classes each day, from stretching to balance to Tai Chi, PiYo [a blend of Pilates and yoga], and aquasize.”

This attention to physical and mental wellness, Cotz told BusinessWest, is due to behavioral differences among three generations: the Silent Generation (born 1925-1944) and the GI Generation (1905-1924), which together which make up a large portion of Glenmeadow’s older residents, and the older edge of the Baby Boom Generation (1945-1964), who are now entering the facility or on the waiting list.

“They are very different populations; the expectations of people we’re serving are changing,” said Cotz. “My parents’ generation, the GI population, were kind of ‘give me a cot and a cup of coffee, and I’m good to go.’ But the people in their early 70s coming in clearly have higher expectations in terms of amenities, programs, and services.”

The standard independent-living facility — with individual living units, one large dining room, and some separate rooms for a lounge, library, puzzles, and crafts — are from a bygone era. Now, the demand for more contemporary open space and more choices for meal times has changed the entire look and feel of Glenmeadow’s first floor.

The complex recently invested $4 million in renovations to tear down interior walls, open up meeting rooms, add more windows for natural light, expand the wellness area, and split the formal dining room to create the casual Doorstop Café, as well as more administrative space for the growing Glenmeadow at Home.

Another concern is the alarming trend of cognitive loss, ranging from general senility to vascular-related dementia to Alzheimer’s disease. Both Glenmeadow and Glenmeadow at Home aim to identify the first signs of impairment and the supports necessary to keep people independent for as long as possible.

While Glenmeadow is a private-pay business, the nonprofit accepts donations through requests and estates, and has an investment portfolio of $15 million. Those investments can help those that outlive their resources; Cotz said the facility has never discharged anyone due to inability to pay.

In addition, a few years ago, Glenmeadow began offering the use of its facilities to non-residents for only $25 per month. With little advertising, membership escalated to more than 80 people after renovations were completed last fall. Members take advantage of the pool, use the fitness programs and equipment, and grab soup or coffee at the Doorstop Café, Cotz said. “It allows the public to realize first-hand what could be their next home.”

Elizabeth Taras can be reached at taras@businesswest.com